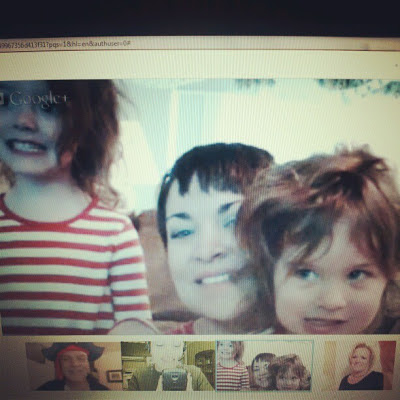 As you know, we have been living in Japan for the last six months. Last year at Christmas, we were living about 12 hours from family, so we didn't make it home that year either. Instead, our extended family got up at 5:00am so that they could Skype with our girls on Christmas morning. We had some family on an ipad, some on the computer hooked up to the tv, and some on a second computer. Needless to say, it was juuuuust a little crazy at times.

This year, we decided to use Google Hangouts to be with family on Christmas morning. Our Christmas morning was family's Christmas Eve, so the timing was much better for them this year! *wink* Before the girls came into the living room to see what Santa had brought them, we had both of my parents, my in-laws, my brother-in-law and his wife, my sister, my dad's girlfriend, and my grandmother on our tv (hooked up through a laptop with webcam).

Don't get me wrong, it was wonderful to allow our family to share that moment with my children. But after that, chaos ensued. Everyone was trying to talk and in an effort speed things up, The Hubs was trying to get the girls to open all the presents from family first. Thing 2 was ripping through presents one after the other and I was trying to keep up with what she got, and who it was from, so that she could say "thank-you." I started feeling very overwhelmed. I realized that Christmas morning with my kids was flying by me. I hadn't even begun to look at my gifts, stockings hadn't been opened, I hadn't taken any pictures and I was missing the joy of watching my girls open their presents because I was trying to make sure the webcam was pointed at the girls.

I realized that although we had the best of intentions by trying to have our family with us, we were missing out on our own Christmas. I told our family that we were going to call them back individually later and apologized for having to go. Once the laptop was turned off, a wonderful quiet settled over the room and we took a minute to regroup. We got our morning caffeine, opened a toy or two for the girls, and The Hubs and I started exchanging our own gifts. We were able to slow down and enjoy the magic of the moment.

I'm thankful for technology. I really am. The reason my kids miss their family so much is due to the fact that they video-chat with them almost every day. Our family aren't just a bunch of strangers on the other side of the world, like they would have been 10 years ago.

But this Christmas, I learned that while I love all of our family dearly, there are still times where I need to put MY family first. The best memories are made when we're able to be fully present and allowed to slow down from the often hectic pace of life.

Next year, I think we'll just videotape our morning and send it to family when its all said and done. I know this season in life with little ones won't last very long. And I want to savor it. 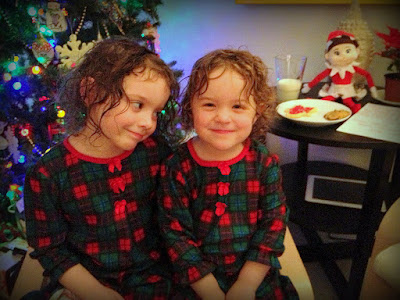