What is discipline? And is it really necessary?

*This is the second post in a series on the book Out of Control: Why Disciplining Your Child Doesn't Work and What Will by Dr. Shefali Tsabary. You can find the first post HERE. 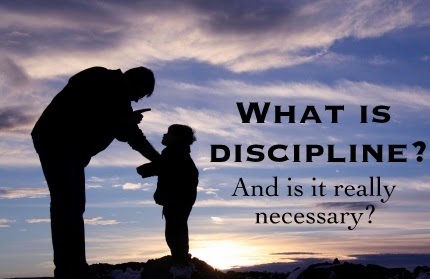 The word, “discipline,” comes from the Latin word “disciplina,” which means “teaching.” This Latin word referred to education and training, self-control and determination, knowledge in a specific field of study, and/or an orderly way of life. If you Google the definition of the word “discipline,” you’ll see many definitions that refer to self-control, and teaching oneself a desired behavior (think of monastic life as a good example). But for the last few years, discipline has looked very little like "self"-control in my house.

My children aren’t teaching themselves how to behave. I have to teach them. It’s my job - and dare I say, my right - as their parent. I have yelled at my children, threatened them, used time-outs, and taken away beloved toys and activities. I have done all these things when I was convinced it was the right thing to do, and when I had no idea what else might work. This idea that we must scare or punish our children to teach them correct behavior has become a fundamental feature of being a “good parent.” And I bought into it without question.

But is it true?


“When we engage with our children from the belief that child discipline is a vital aspect of our role as parent, we assume children are inherently undisciplined and need to be civilized. Without every really thinking it through, we’ve bought into the belief that without discipline, children run wild. We interpret all their misbehavior through this lens.”

Maybe we’re giving our kids too little credit. Dr. Tsabary believes that using discipline is detrimental to the very behavior parents are so desperately trying to teach. And she also knows that suggesting this to any parent will most likely follow with the question, “But how will my children learn if I don’t discipline them?”

If you have children, think about how you usually discipline your child when they are having bad behavior. I can think of many situations - maybe the girls were fighting over a toy, said something mean, or acted disrespectfully towards me or their father - and the result was often something being taken away (maybe iPad or computer time the following day) or maybe they were sent to their room for time-out. From my point of view, this was to teach them that their behavior was wrong, and that they shouldn’t have that kind of behavior anymore. But Dr. Tsabary argues that this type of discipline and real teaching are worlds apart.


“To illustrate this, think back to how you felt when you were sent to your room, your favorite television program was turned off, you were grounded so you couldn’t see your friends, your phone was taken from you, you were yelled at or you were spanked. Did you feel good? Did it become natural for you to do what it [the discipline] intended to teach you? No, what you learned is, ‘My parents are the boss, so don’t piss them off.’ You likely also learned that your parents treat other adults, work associates, and maybe even pets with more respect than you.”

I can't tell you how often I hear myself speaking to my children, and realize that they are the ONLY people in the world who I talk to that way.... If I were to talk that way to a friend, they probably wouldn't be my friend much longer. If I were to talk that way to my spouse, we'd have some serious marital problems beginning to develop. If I'm honest (and I think many parents feel this way), I feel a sense of power over my children that allows me to talk to them however I please because they really have no option but to take it. These are the moments when I have to remind myself that I don't own my children. They are not my possessions. ....I've just been given guardianship over them for a while.

A rebuttal I often hear to any argument against harsh discipline is that “parents aren’t supposed to be their children’s friends,” and “if it works, then what is wrong with doing it?”

But here’s the thing: I don’t want to be my child’s friend, but I do want to be their ally. I want them to genuinely know that I want the best for them - that I want to help them succeed. (We could get into a whole other can o’ worms by discussing what “success” really means, but I’ll save that for another day.) I don’t want my children to fear me, because in really difficult situations down the road, I want my children to feel comfortable coming to me for help. I want them to have good behavior, but I want them to choose it because they see the benefits of it emotionally, spiritually, and relationally - not because it’s what they need to do to keep out of trouble. I want us to be a team that works together to figure out the right way forward - even in the most simplistic 5-year-old situations - rather than a mother and daughter who are always at odds with each other for control.


“Though they may comply with our demands because we force them to do so, internally they develop a resistance not only to what we are asking of them, but even more so to us as the messenger. Their resistance, or at best half-heartedness, intensifies the parent’s need to control, as the parent bears down on the child, believing the stricter they are the more the child with comply. It’s this resistance that becomes emotional plaque, creating barriers to learning, growth, and - most of all - connection between the parent and child.”

So here’s what I want you to consider: If you feel like there are many times where you are at odds with your child - if you ever feel as though there is a power struggle going on between the two of you - do you feel as though it’s absolutely necessary in order to help your child develop into a moral, emotionally intelligent, successful adult? And if there’s a smidgen of doubt, would you be open to a different way of doing things? A way that lessens the tension on both of you?


My next posts will talk more about our addiction to control, our reactions to our children, and what other tools we have available to teach our children good behavior. I hope you'll follow along!
Posted by Kimberly at 5:05 AM