A Day in the Life: Homeschooling with a 5- and 4-year old.

I'm sure I have lots of friends who wonder what our days look like and how we homeschool. While we try to keep a general rhythm in our home (the pace of our day, our mealtimes, and a weekly schedule of activities), every day might look a little different than the one before. I am not a fan of schedules, but I am a fan of routine. My girls know that we'll generally try to do some "school" in the mornings, and we'll hit the playground in the afternoon. Everything else is up for discussion.

So I kept notes on what today looked like, and I thought I'd share them. I often doubt my ability to homeschool when I think about how many hours kids spend in private/public school and then I realize that we've only done an hour of "school" (and some days less!). What is more helpful to me is to keep track of what my kids get excited about during the day - what they're interested in learning - and not the amount of time we've been sitting at the table.

My husband is getting dressed, and I drag myself out of bed too. I've been getting up with him for the past couple of months and it has been so nice to enjoy a cup of coffee (or two!) together in the mornings. We get a chance to connect, talk about our upcoming day, and after he leaves, I get between 30-60 minutes of quiet reading or blogging time before the kids get up.

The girls wake up and immediately head to the tv. They used to get up so early (we're talking 5:00am EVERY morning) that tv first thing in the morning has become our routine. I'm not sure I could change it, nor am I sure that I even want to. It's nice to be able to get a shower, straighten up the house, and make some breakfast uninterrupted. They usually watch two 20-minute shows each. Yes, it's a long time to watch, but most of the time, they'll watch educational shows from PBS so at least I know they're learning something.

We will have had breakfast by the time the news comes on (we're in Japan, so we get the "nightly" news from the US at 8:30am) and they go do their morning "chores" while I watch. Their chores consist of getting dressed, making their beds, going to the potty, and brushing their teeth.

This morning, they both come sit with me to watch the end of the news. Thing 1 sees a story about some US troops who were in charge of finding works of art stolen by the Nazi's during WWII. Next thing I know, Thing 1 is asking me about Adolf Hitler. So I pull out our iPad and look up a Brain Pop video about Hitler and another one about the Holocaust. We have some very deep discussion....

While I wouldn't mind starting school now, the girls have usually jumped right into playtime. This morning, they donned their princesses dresses and jewelry and attended a royal ball. When their imaginations are in full force, the last thing I want to do is have them come sit at the table for "school work." Since the girls were playing, I decided to do a bit of cleaning and work on the computer.

They've been playing so well that I haven't bothered to make them stop. However, Thing 1 wanders into the dining room where she sees that I've laid out a couple of workbooks for her. Without my saying a word, she sits down and completes two pages of her phonics workbook before jumping up to play some more.

We have lunch. While the girls are sitting at the table, I use it as an opportunity to read the next chapter in our Story of the World. We learn about the Israelites leaving Egypt, and the story of Moses. The girls are thrilled to hear the story again because they have enjoyed watching "The Prince of Egypt" on Netflix. We talk about what it means to be polytheistic or monotheistic. After the girls finish lunch, they decide they want to take a bath. We don't usually take baths in the middle of the day, but since Thing 2 hasn't been feeling the greatest, I agree to it.

After the bath, Thing 1 sits down at the table and pulls out her 2nd grade math workbook (a random workbook I found at the Navy Exchange). I only bought it a few days ago, but she has been working on it every day since. She decides to do some pages about counting money and telling time. Then, before she runs off to play again, I ask her to do a handwriting practice page on the letter A (both upper- and lower-case). She isn't thrilled with this, but I tell her that we're going to be doing one letter a week to help her handwriting become even better (I tell her she'll be proud to write so well after all her hard work practicing). Oh, and all this time that Thing 1 has been doing workbooks, Thing 2 has just been content playing on her own. 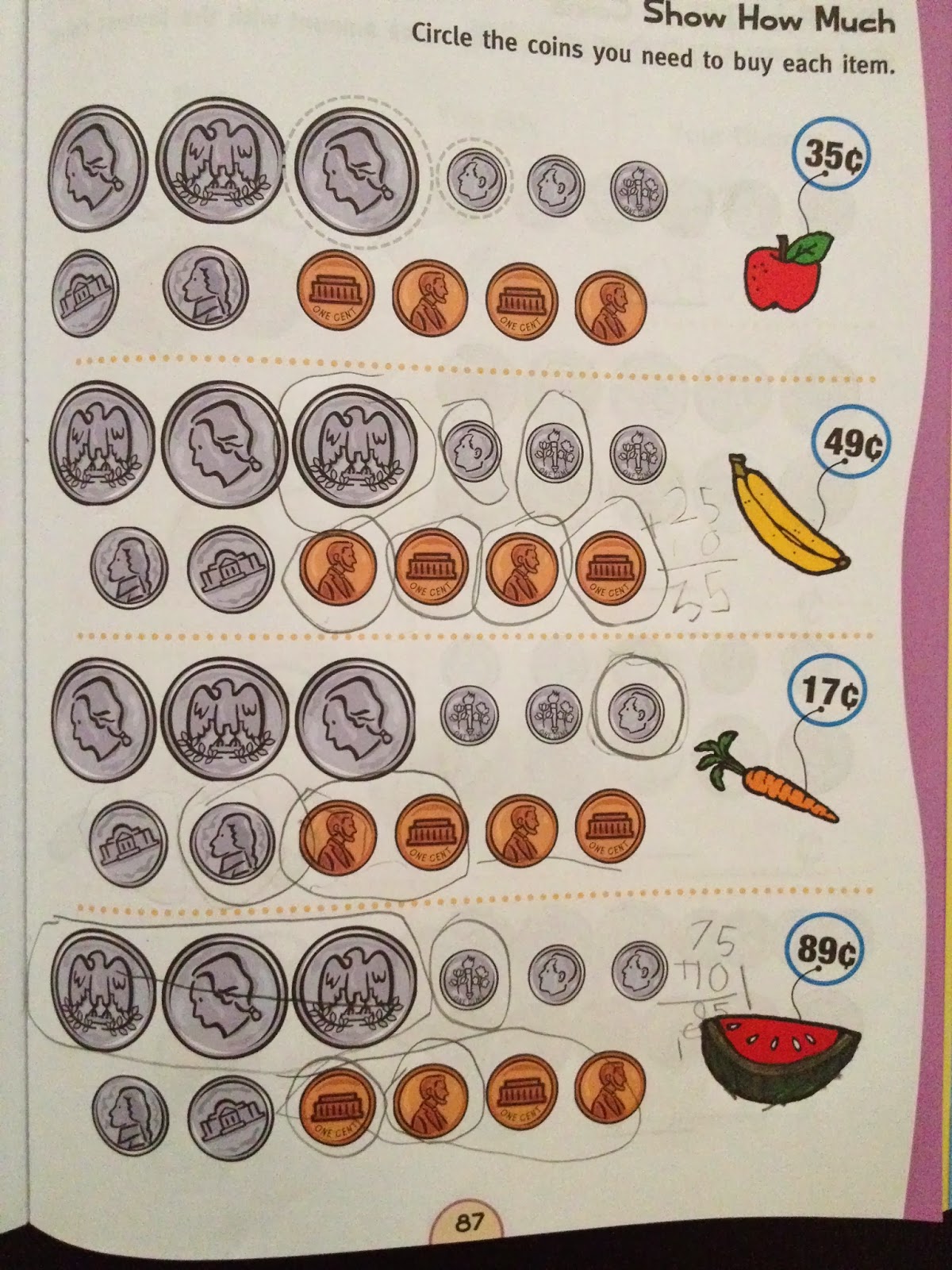 Since Thing 1 finished her handwriting practice, we gather her projects for Girl Scouts and move to the living room floor. She has done two projects to receive two pins (the "My Faith, My Promise" pin, and the "International Friendship" pin), both of which she'll receive today at an awards ceremony. We go over her projects to make sure that she'll be able to discuss them in front of her troop. Then, Thing 2 wanders over and I decide to do some reading practice with her. We've started "Teach Your Child to Read in 100 Easy Lessons," so she's familiar with the "short a" sound. I grab a white board and marker, and start writing out "short a" words for her to sound out. She does 24 of them before deciding she's done! I think reading is going to come more easily to her than it does for Thing 1. 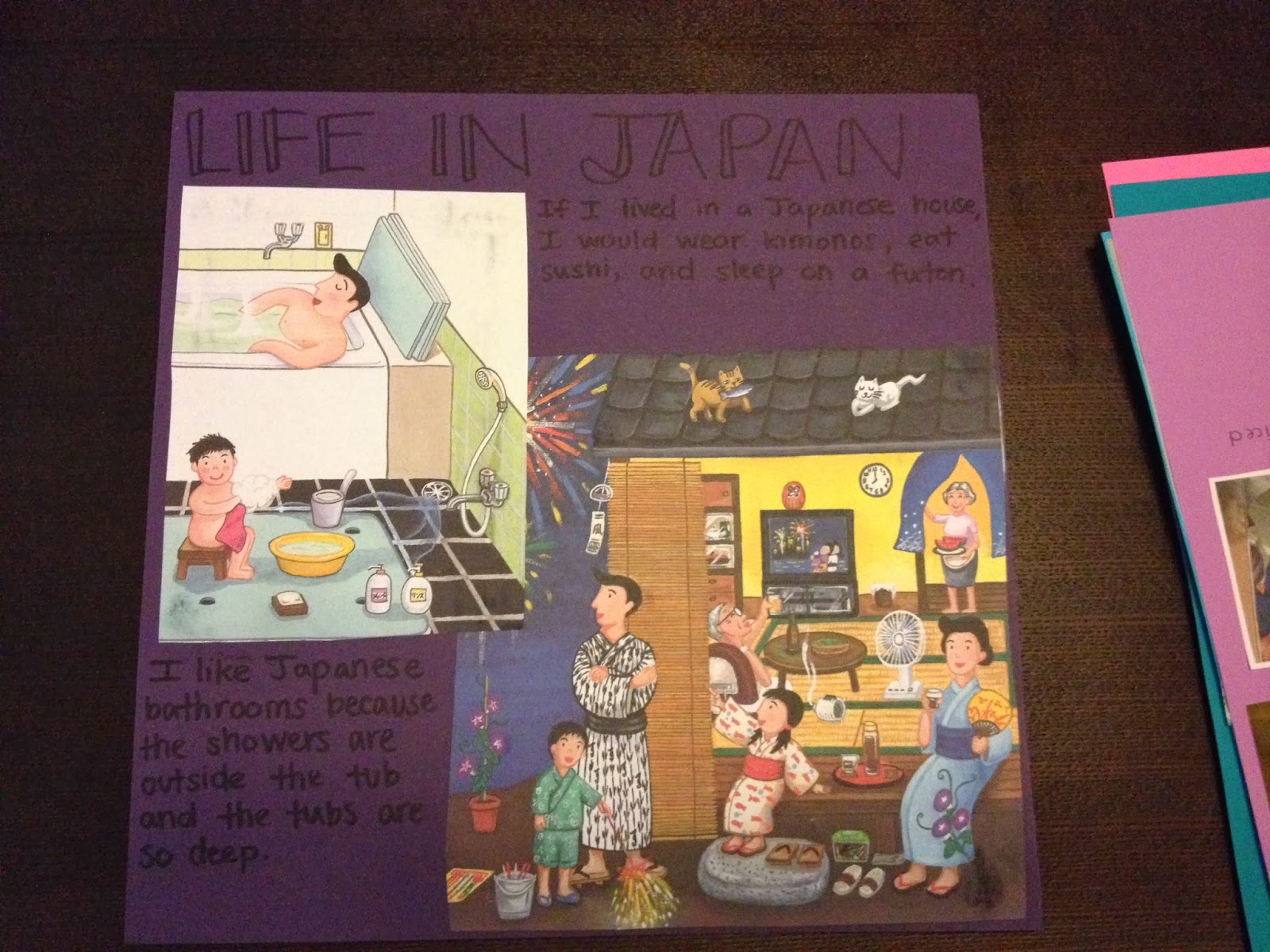 We would normally just play until it's time for the park (maybe around 2:30), but Thing 2 has been running fever. The girls are starting to get a little tired of playing, so I decide to let them watch something on the tv. However, it's my choice. They watch Daniel Tiger and Magic School Bus while I work on this post! :)

We cut up some apples for an afternoon snack, and Thing 1 starts getting dressed for her Girl Scout meeting. It's time to potty, fix our hair, and get ready to head out the door.

We drop off Thing 1 at her meeting, and Thing 2 and I go check our mail. She's not feeling all that great, so we head back to the house and I let her lay on the couch and watch her favorite movie, "The Croods." She's running a fever again, so I give her some tylenol. I spend the next hour putting away laundry and emptying the dishwasher. Before I know it, it's 4:30pm and time to go pick up Thing 1.

I wait for The Hubs to meet us at the Girl Scout meeting so that he can pick up Thing 2 and take her back home. Don't want her spreading germs, you know. After he gets there to pick her up, I stay around with Thing 1 to help the troop leader start getting ready for the awards ceremony they're having tonight. Our troop's Japanese sister troop is attending and we're having dinner and presenting the girls with some extra pins they've been working towards. Thing 1 and I finally get back home after her awards ceremony. It's time for the girls to start getting ready for bed. They get on their pajamas and brush their teeth. Then Thing 2 pretty much goes crazy. She's just laying on the floor giggling and we don't even really know why. We spend a bit of time just hanging out together in the living room, goofing around. They pick out a book for bed (tonight it's a new one by Mo Willems) and I read to them, sing them a song, and then tuck them in for the night.

The Hubs and I settle in to watch a couple of our favorite shows on Hulu and we'll be in bed by 9:30pm.

I'd much rather go to bed early these days. It's so nice to get up early in the morning for that wee bit of quiet time before the kids get up. That's when I can focus on some good reading or blog work. My brain has lost it's mojo by the end of the day.

When I look back over our day, it's easy to see how learning happens all day long - not just at a specified "school" time. And don't forget, for young children, play time is when some of the most important learning happens.

Email ThisBlogThis!Share to TwitterShare to FacebookShare to Pinterest
Labels: Homeschooling